St. Edmund (1174-1240)
Peacemaker, Father of the Poor, Patron of Afflicted and Stillborn Children

Edmund was the first child born to deeply devout parents in a small village near Oxford, England. It was on 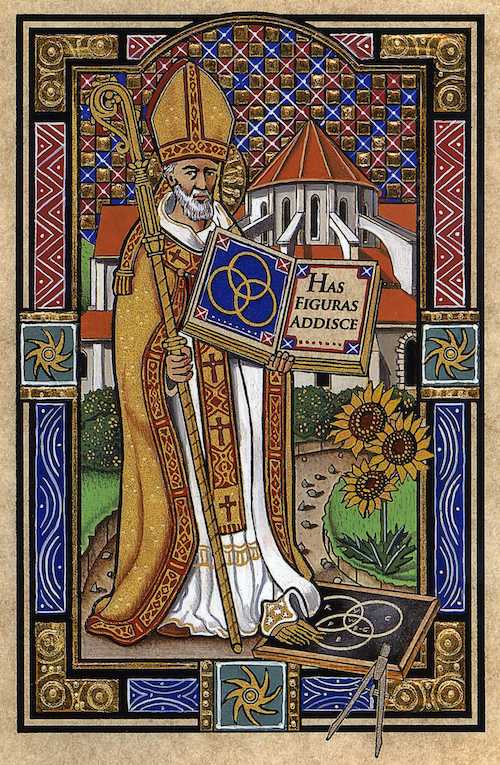 a pilgrimage to the shrine of King Edmund the Martyr when his mother, Mabel, first felt the baby kick. “It will be a boy,” she told her husband. “We’ll name him Edmund.”

When Edmund was born on November 20, the feast day of King Edmund, he was born dead. In despair, Reginald told his wife that he would go prepare a grave. “No, no,” cried Mabel. “Call the priest first and have the baby baptized.” The priest poured water over little Edmund and at once the child began to stir. While his parents stared in amazement and joy, little Edmund began to cry.

Edmund became a noted professor of math and geometry at Oxford in England. One night Edmund’s mother came to him in a dream. In his dream, he was about to give a lecture and had filled the blackboard with geometrical figures. Suddenly his mother appeared. “Son, what are these things on the blackboard?” she asked. Shaking her head, his mother picked up the chalk and drew three circles on the board. She pointed to each one, saying, “Father, Son and Holy Spirit. Son, please study these figures from now on, and no others!” After much prayerful meditation, Edmund decided to study theology and become a priest.

After becoming a priest, Edmund left Oxford for a country parish near Salisbury. Shocked by the poverty of his parishioners, he began spending most of his salary and selling many of his possessions to help them. Also during this time, England was on the verge of civil war. When King Henry III brought in a foreign army to crush the rebellious barons, Edmund bravely left his country parish to confront the King and was able to plead for peace.

The Pope, learning of Edmund’s self-sacrificing spirit, named him Archbishop of Canterbury in 1234. While journeying to Rome, Edmund fell sick and died in Pontigny, France. He was buried there at the abbey and many miracles took place at his tomb. Within six years, the Pope declared him a saint. Six centuries later, the Society of Saint Edmund was founded at Pontigny. The Fathers of St. Edmund opened apostolates in France, Canada, England, the United States and Venezuela. The Fathers of St. Edmund try to be, as Edmund was, “eyes to the blind, feet to the lame, father of the poor and friend to strangers in trouble.” The call to serve led two priests from the Society of St. Edmund to establish Edmundite Missions in 1937.